File this under more weird and obscure things that I read 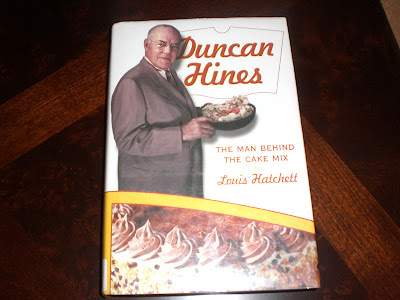 Who knew he was a real person and more than the name of a cake mix?! Who knew he had a fascinating life.

In a nutshell.... He was a traveling sales man for a printing company in the 1920s, who, as a hobby, began to take detailed notes on the places he found to eat on the road. Those notes eventually became self published books recommending restaurants and grew so large he quit the printing business to focus on his "hobby". He ran his business out of his own home with five secretaries and never advertised, only gave interviews to news papers when asked.  In the 1950's, his name was synonymous with quality so much so that manufacturers' lined up hoping to get his name and picture of their products in the supermarkets with a sticker that said "Recommended by Duncan Hines." The company that Hines started was sold in 1955 to P&G. At that time, Duncan Hines products accounted for 25% of P&G's sales.

Pretty impressive for a hobby.

Sadly, the man is forgotten and only the name on the cake mix remains.