Spent a lot of time looking for coffee. Got up too late for coffee at home. Got out of line at Starbucks because I would be late for the doctor. Only to sit and wait 20 minutes to see the doctor. Begged for coffee from the nurse. After asking twice, she brought me a cup from their office keurig. After exactly three sips, the doctor came in, took it out of my hands and I got it back cold. I also got a shot. But instead of going to work, decided it would be a much better idea to go to the outlet mall. Two hours later, one pair of earrings, one bracelet and  these jeans on sale for 50% off I finally rolled into work feeling pretty dern good. Then I ate 3 1/2 cookies from Subway and left early.

Got home and cleaned the entire downstairs, changed sheets,  got out the ladder, the hammer and nails and hung some fabric on the windows to see if it will some day be my breakfast area curtains, washed clothes, started my antibiotics, then made a menu plan for next week. 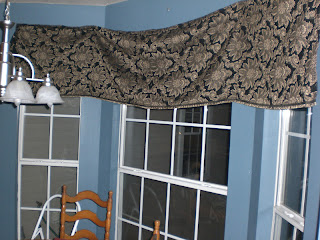 This fabric holds a very special place in my heart. You cant tell from the picture, but it is a heavy, thick, woven brocade. It came into my life when my friend from law school decided she didn't want to practice law after all and quit to stay home. After six months at home, adopting three puppies and getting two plastic surgeries, she needed something else to fill the days. Her supportive husband, who happens to also be the Chancellor of the largest school in this state, suggested she redecorate, which was the best thing that ever happen to me. All the custom made drapes and extra fabric she had in her house from the professional decorator she had hired a year earlier when she got married, came to live at my house. It was one of my prized possessions and I told everyone who would stand still in my living room long enough that I had custom made curtains. I sometimes left out the part that they weren't custom made for me or custom made for my house.

When we sold the house, the new owners made it part of the sales agreement that the curtains stayed. I refused. My husband negotiated with me if we sold the house for the full asking price, we'd get our own custom curtains. I took the bait, and the fabric and left the curtains. Fast forward to him realizing the price of custom curtains and four years later, when you see that every window is still bare, you know how that ended.

But I still have the fabric and now thinking long and hard about making some mistreatment's.

After four hours of sleep (thank you, steroid shot), I was up at 5:30 wondering when Albertsons opened and if we had anything to make waffles with. I had biscuits, sausage and coffee instead, while hunkered down in bed, with the dog and the electric blanket and caught up on (and even got ahead of) my Bible Study for three hours while the hubs did his usual Saturday all male breakfast club. It was glorious.

Then, I celebrated the return of cold weather for the weekend by making a big pot of shrimp and corn soup which was the perfect first occasion to use the new gumbo spoons I gave my husband for Christmas. (you can imagine how thrilled he was to have 12 matching gumbo spoons for his Christmas gift)

And made White Chocolate Bread Pudding (recipe coming), which is very dangerous to have in the house. Its something you should only order in a restaurant with 8 other people and pass one serving around the table. But now, I'm trapped with a whole pan at my house. Which I have been steadily polishing off. and I feel a little sick now. Imagine.

Wanted to go to JC Pennys but didn't want to get dressed, so I did a little shopping at home and discovered Jen Hatmaker and her book 7. I love her already. Don't even have the book yet. and then I ordered her Bible Study, too. I cant wait. I also ordered this, which I was originally going to read for Lent, but I am clearly late. I blame the massive amount of sugar from the Mardi Gras King Cake season. I'm sluggish. And as soon as I get paid this week, I am ordering this.

And... I spent a lot of time with my hands in dishwater today. The dishwasher quit. When it was full of dirty dishes of course. My husband accused me of sabotage in order to get a new one. I  was horrified! I would never intentionally break the dishwasher! I'm too busy dreaming up ways to break the oven because I've had my eye on this one, which he has explained to me over and over we cant have because it has to be a Jenn-Air floor exhaust to fit into the kitchen island but I just refuse to believe it and I keep trying.

After he laid on the kitchen floor all afternoon with the dishwasher in parts and pieces, he finally determined he needed to go to Home Depot for a tool and returned with a brand new dishwasher, which is currently just sitting in the middle of my kitchen while the old one is sitting outside in the middle of the walkway. 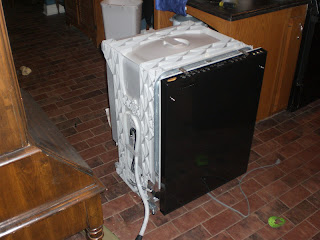 And he told me it was my birthday present but I keep hoping he was kidding.

After a little more sleep (6 hours!), oatmeal, Sunday School and Church, I skipped the usual Sunday lunch with my aunt to have a birthday lunch with my husband, (where we realized our first date was when I was 29 and now I am 43), a little shopping at JC Pennys (bought this) and fortunately for me, the Camilla Stroll in Hammond coincides with my birthday, which is the only reason my husband would agree to go look at 500 different kinds of Camilla's all planted in the 1930s to 1950s. We actually went last year but it was cold, rainy and miserable. Last year, we looked at approximately three Camilla's and called it a day. But this year, the weather wasn't as miserable, but cold, and I did manage to drag my husband around  to almost the whole thing while I picked out my favorite one, Dixie Knight Supreme, and forced him to take photos. 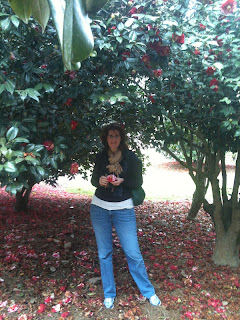 Then Sunday evening the excitement ended, as it usually does.  It consisting of decaf coffee, polishing off the rest of the white chocolate bread pudding, kicking myself for not getting  to the upstairs closet organization project this weekend, a bath, picking out clothes for tomorrow, getting the trash to the curb, going in circles picking up around the house in an attempt to show some small accomplishment before starting work again in the morning.

didn't know you were sick. sorry.
what a packed 3 day weekend for you.
Happy birthday!!!! Enjoy your monday.