Q: I want to know more about your dog. What's his name (I know you've told us before)? How old is he? Have you had him since he was a puppy? Is he "part of the family" or "just a pet?"

A: When people ask if I have children, I say yes. One son. His name is Butch #3. I got to name him. I woke him up to take this picture. 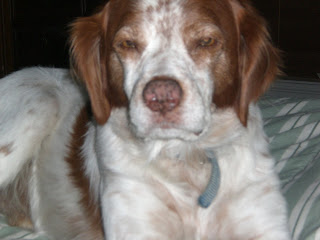 His birthday is January 21, 2002. My husband got him when we were just dating, and he was about six weeks old and very small. 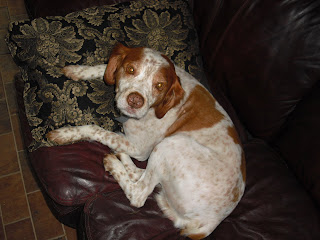 When I was little, I had two other dogs, both named Butch. 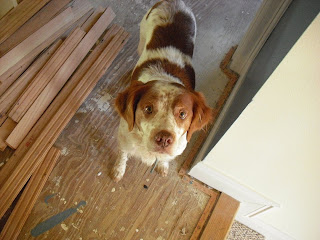 For the first few years of his life, he was a "Daddy's boy". He did not really like me. 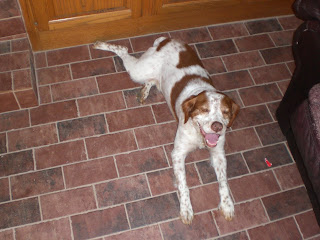 He really liked the woman next door. He thought she was his mother. Here he is sleeping in the clean clothes. 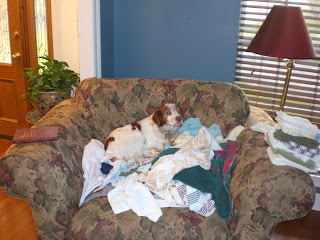 But then, after we got married, he slowly warmed up to me, mostly because I take him for walks and then let him sleep in bed at night. Now, he loves me. 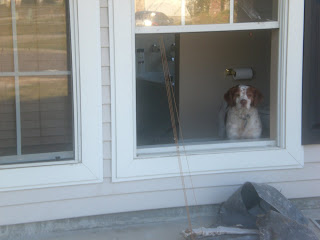 Before we moved into the new house last year, he was an outside dog, who just came in to visit. 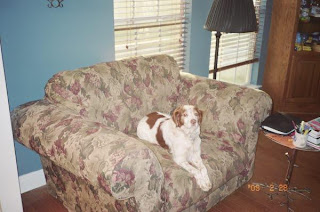 We had to keep him inside for a few months while building a fence and he liked it so much he refused to go live outside again. 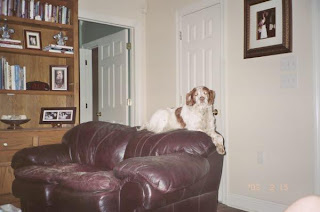 We tried to make him stay outside, but then gave up. He might be a little spoiled. 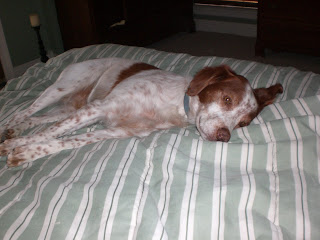 He is a Britney Spaniel, cousin to the Cocker Spaniel. He is a hunting dog, a "pointer", and very fast. I know thats hard to believe. 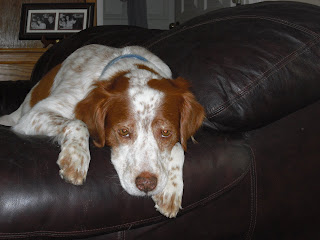 Sometimes when you let him out the door, he takes off like a flash. He loves to run to the river behind our house. He also loves to lay around. 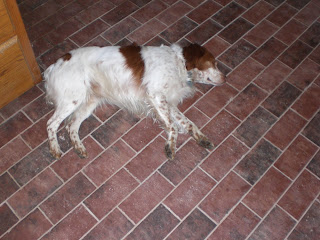 He is a really good gaurd dog. Knock on the door and he will bark up a storm. 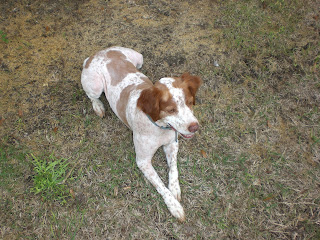 He follows me all over the house and makes a sad face when I leave him to go to work. Even watches the car from the window. 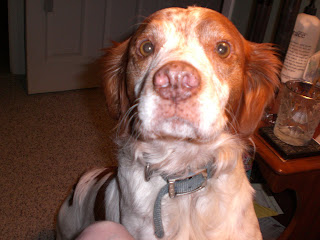 A: I wish I had some snappy little answer.... but the truth is I read that phrase in a magazine describing a china collection and it just struck me. I dont have an unusual amount of pink in my house or garden.

Q: Have you ever considered catering business?

A: No. Not willing to jump through the hoops required of licenses, tax issues, requirements of a commericial kitchen, and the bottom line is.... I dont really cook that well, just like to do it.

Q: Why dont we see more pictures on your blog?

A: Remember when my computer caught on fire? I never got another one... just tried to fix the one I had and make do. Sometimes the computer lets me put pictures up and sometimes it does not. Its hit or miss.

Love the Butch photo montage! You're right - he is lookin' a little bit spoiled. There is no way in heck - ever ever ever - our dog will be allowed on our furniture. LOL. Then again, half the time I won't let the kids on it either. Kidding. Maybe...

Did you notice how rough the couch is looking in those photos? He may have to stay off the new furniture.

Did you notice how rough the couch is looking in those photos? He may have to stay off the new furniture.

Great pictures of Butch!! He looks spoiled but that is okay. It is okay to spoil your kids if you have the energy to maintain them LOL
I totally understand about your computer. Mine is so old but the economy dictates that I wait before getting another one!
Have a blessed day!

So glad you liked the book! It is my all time favorite and I've easily bought or checked out my weights worth of books... and then some. Happy Homemaking and good luck with your new routines! Hope it gives you the great sense of accomplishment it gave me.